Richard Fox is Taking all of my Audible Credits Richard Fox is taking all of my Audible credits and I’m loving it!
I want to take a departure from the normal editing article and talk about a book series that is currently out, why it has caught my attention, and why you should be paying attention too.

If you haven’t heard of Richard Fox let me be the first to introduce him. Fox is an award wining author of the military sci-fi series, The Ember War Saga. He served in the US Army for a decade with two tours to Iraq. I had the opportunity to meet Fox during a veteran fundraiser several years ago before this series had come out. The books take place in a future where an alien race has all but wiped out humanity on it’s path to total conquest.

Why? That’s the question I keep asking myself as I listen to the crew of the Breitenfeld get into trouble and barely survive by the skin of their teeth.

The obvious answer would be narrator Luke Daniels. He brings the characters to life which allows Fox to tell multiple story lines with a vast cast of characters without me getting lost. A bad narrator can ruin a book and a great one might keep my attention during a bad book, but not enough to come back for more. So even with Daniels’ amazing performance I knew there was more to this.

Next, I started looking at the content of the story. The characters range from the most noble like Lieutenant Hale who will sacrifice his own life if needs be to save the helpless, to the cold calculating alien probe (not that kind of probe) that sacrificed almost all of humanity on a chance at beating the enemy. The questions of basic human morality is played out in scenes that beg the question what is required to keep our humanity when the very survival of the human race is on the line. These ideas and character types play again and again allowing Fox to setup each book with roughly the same story with different elements at play. But is that it?

Same But Different is key to getting readers to come back to a series but I knew that still wasn’t it.

I was about to give up my quest to understand why these books continue to pull me back when I discovered the answer in the most unlikely of places: Instagram. A friend who is a still serving in the army had just posted a picture of a sunset framed by a couple 10 wheeled PLS trucks.

Not the stuff of eureka, but as I was liking the post and looking at the picture it hit me like a ton of bricks. This is the first time in a decade that I wasn’t out with the army training in the desert and I’d never see another sunset or sunrise with my soldiers.

I’ve said it before: story is the ultimate virtual reality.

Story is my best option to get “high” on the life I’m missing, and Richard Fox is my dealer.

As writers we deliver life in bite sized chunks. Morsels that feed the emptiness in our souls and fuel us for the rough road ahead. Story lets us live the life we always wanted in an environment we can control. It is an impressive power that shouldn’t be taken lightly.

Understanding this power can give you a better insight while you are writing and editing. Think about what kind of life you are portraying in your work and who whats to have that in their life? For me I want the undeniable loyalty of my squad. Others might want to escape to faraway lands, while some want to be scared out of their mundane life. Understand what your story delivers and find the addict reader who is looking for that fix. They will thank you 🙂

Check out all the books by Richard Fox here! 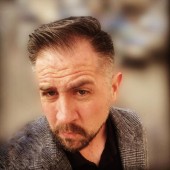 Even though Clark Chamberlain has been privileged to work with New York Times Bestselling authors, edit hundreds of books, and teach thousands of writers the emotional impact of fiction, he still considers himself a student of story. His passion for the study of story drives him forward to explore and share his discoveries in easy to understand lessons and working one-on-one with authors of all levels. He is the co-host of the Book Editor Show, creator of multiple creative writing courses, author of five books, believer of dreams, and once tore his cooler from the mouth of a bear. How to Maintain your Writing Motivation